Retirement Health Costs are Higher than you Think

According to the Center for Retirement Research at Boston College, the above is largely true no matter how high you think they are.

A good rule of thumb for estimating health costs in retirement is that Medicare will, on average, cover 60%, while the remaining 40% come out of the retiree’s pocket. Unfortunately, according to a lengthy paper published recently by professors at UCLA and Harvard, most would-be retirees habitually underestimate the impact that health care costs will have on their finances, either blithely assuming that Medicare will take a larger share of the burden from them or failing to appreciate just how large that 40% liability is likely to be in terms of real dollars. 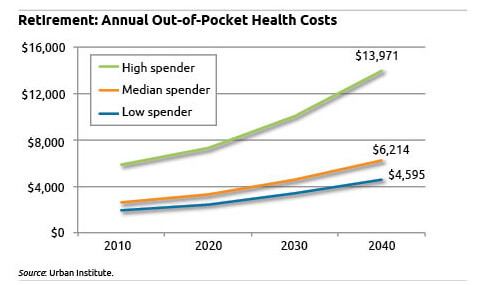 So how large is it? Large, at least according to the Urban Institute’s calculations. The median retiree will spend more than $6,000 per year on health care costs alone, while a particularly high spender (or one nearing the end of their life) may be spending as much as $14,000 yearly. This is all without counting any significant end-of-life costs (most retirees spend the majority of their lifetime health-care costs in the last eighteen months of their lives.

Given how large health care costs loom in retirement, it goes without saying that any significant underestimation of their impact can have a staggering effect on your retirement security. This isn’t to say that every retiree needs to budget $15,000 a year for such things, but a careful calculation of retirement expenses is impossible without an accurate understanding of the costs you are likely to face. For these reasons, NewRetirement has always recommended the use of a proper retirement calculator, if only to set realistic boundaries, not guesses, on what your expenses are likely to be, and what level of preparation will be necessary to ensure that you have the capacity to meet them.

Whether you use NewRetirement’s calculator or another source of information, nobody should go into retirement armed only with guesswork.

Learn more about the true costs of retirement with the NewRetirement Retirement Calculator.