The Lifetime Annuity – A Life Vest for Your Retirement 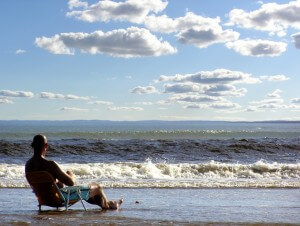 Imagine this: Bill, a 65-year-old man, has been getting ready to go on a big swim. He’s not completely sure how long this swim is going to last—although he has an approximate distance in mind—but he’s been preparing for it for decades. But without knowing exactly how long this swim will be, Bill isn’t sure he’s properly prepared. He realizes that as part of his preparation for this big swim, he’s going to need a life vest.

Let’s say Bill’s “big swim” is retirement. The average U.S. male born in 2012 can expect to reach age 76, according to the World Health Organization’s 2014 World Health Statistics. But there’s variance in life expectancy, and at age 65, Bill can expect to live 17.5 more years and reach age 82, according to the Social Security’s Actuarial Life Tables.

The big fear many older Americans have is that they’ll outlive their retirement savings. In fact, it’s the number one financial concern of nearly six in 10 people surveyed for Gallup’s annual Economy and Personal Finance poll, as it has been since 2001, when Gallup began asking people about their biggest financial worries.

“Retirement may be a time that many working adults look forward to, but it is paradoxically a source of stress in the here and now,” Gallup says. “A strong majority of Americans, particularly those aged 30 to 64, worry about having enough money for retirement, and this concern has regularly topped the list of Americans’ top financial problems.”

What about that life vest Bill was thinking about in the “big swim” scenario? One thing he could consider as part of his retirement preparation is a lifetime income annuity.

Think of lifetime annuities as a life vest for retirement. These insurance products provide guaranteed income for the remainder of your life.

Let’s say Bill has $250,000 to invest in a lifetime annuity. Bill could receive set monthly payments of $1,390 for the rest of his life, according to our Lifetime Annuity Calculator, based on current interest rates.

The amount people receive from their annuities depends on the number of payments they receive and when they start getting them. But there’s something else that plays a huge role: interest rates. In today’s current low interest rate environment, annuity returns aren’t as big as they’d be at a time when interest rates are higher.

Still, lifetime annuities can provide guaranteed income for the rest of someone’s life and function as a welcome source of stable income.

Are you looking for a retirement life vest? Get a one on one retirement consultation with a prescreened certified financial advisor or try out our lifetime annuity calculator.