September 6, 2018byKathleen Coxwell
The First Lifelong Victims of the Income Gap Are Retiring and Bankruptcy Rates Are Skyrocketing
September 6, 2018byKathleen Coxwell
If you made it into the ranks of high income earners, you are probably going to be okay in retirement.  If you are part of the working class, the news is not as great. The first victims of the income gap are beginning to retire and feeling financially secure in retirement will be difficult for a lot of people. 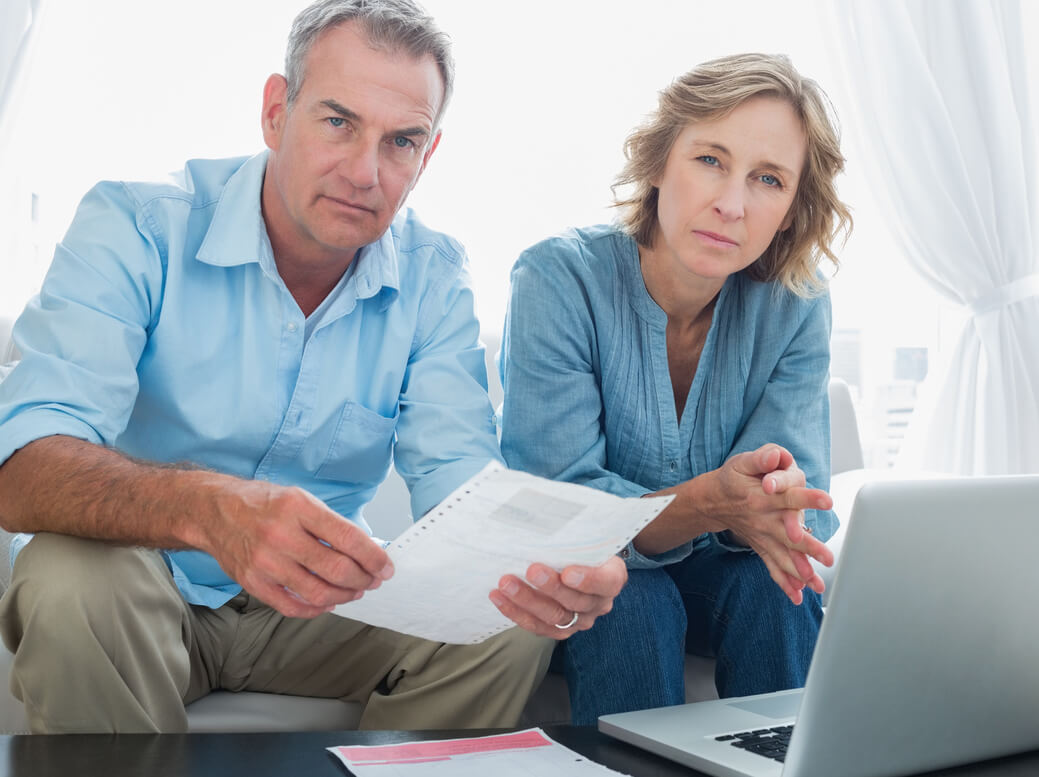 Today’s 65 year olds were in their 20s — at the beginning of their careers — when income growth rates began to diverge in the early 1970s.

A lifelong struggle with slow wage growth has had dire consequences for retirement security. Skyrocketing bankruptcy rates are one clear sign of these struggles.

Over the last 40 years, the rich have gotten richer and the poor have become relatively poorer.

According to the Center on Budget and Policy Priorities (CBPP), from the 1940s until the early 1970s, there was tremendous economic growth that was shared up and down the economic ladder.  Incomes grew at about the same rate for high wage earners as for low wage earners.

In the 1970s, economic growth slowed and income growth rates began to diverge.  Income for households in the middle and lower rungs of the economic ladder slowed dramatically.  Incomes for top earners continued to grow strongly.  In fact, data from the Census show that:

Despite economic recovery from the 70s and overall economic growth as a nation, the income growth gap continues to widen. Only the top earners are really reaping the benefits. 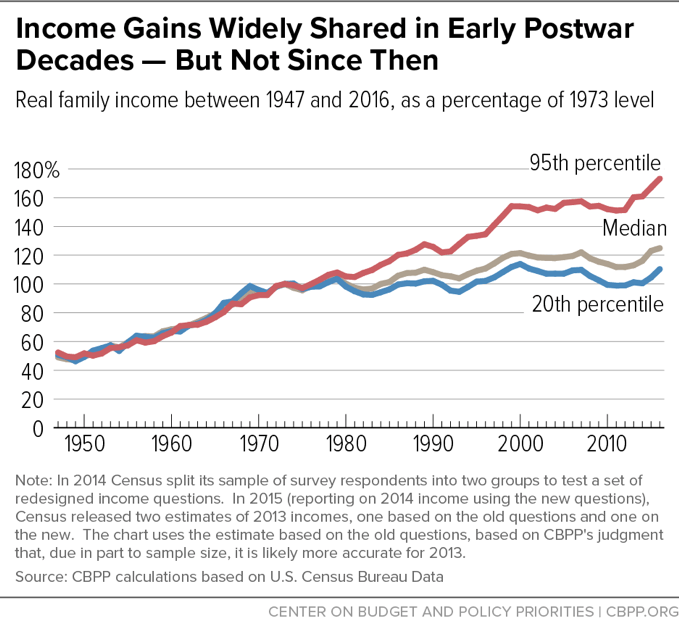 Lower Savings Rates — Less Wealth: Slow income growth makes it harder to save for retirement.  And, the wealth gap is perhaps more dramatic than the income gap.  Wealth is the value of a household’s property and financial assets minus their debts.

More analysis from the CBPP found that: “the share of wealth held by the top 1 percent rose from just under 30 percent in 1989 to nearly 39 percent in 2016, while the share held by the bottom 90 percent fell from just over 33 percent to less than 23 percent over the same period.” 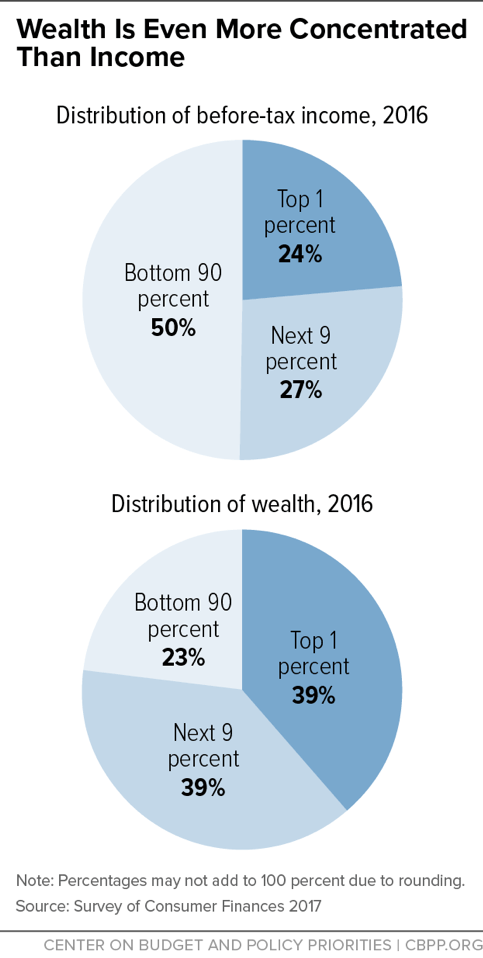 Healthcare Costs: Lower earning jobs can also take a toll on a worker’s health — making healthcare more expensive and further hampering an ability to save for retirement.

Disappearance of Pension Plans:  Lower income workers used to rely on pensions and union benefits.  However, those have eroded over time.  Very few jobs offer those type of retirement benefits anymore.

A Tale of Two Retirements

Take the story of an NPR journalist, Marilyn Geewax, who securely retired last Spring though she continues to freelance for extra retirement income.  Geewax just returned to her hometown of Campbell, Ohio for her 45th high school reunion.  Campbell was a steel town that has seen the closure of factory after factory since Geewax graduated high school.

Geewax compares her early secure retirement with the early retirement of a friend who never left their hometown.

As for my friend, he went on to work at a van plant — until that closed down — and then on to an auto plant. But the hard, physical work wrecked Nicolaou’s knees and triggered other health problems. He had to retire at 56.

“I had quite a few disabilities,” he said. “I got a staph infection after one of my surgeries. And that’s what ended me. It ate my heart. It ate the valve off my heart. And they had to take my knee back out again.”

Oh. And there was something else.

“I had cancer. They said it could a came from the mills from the asbestos,” Nicolaou said. “I’m a 14-year survivor of that.”

Bankruptcy Rates Have Tripled for Those Over 65

The Consumer Bankruptcy Project recently published findings that show that the rate of seniors age 65 and older who have filed for bankruptcy has tripled since 1991. The study found that the lead causes of bankruptcy are medical expenses and a decline in income.

Older people — especially those who have already retired — have fewer resources to rely on when bills mount.  When you are working, you can recover from an extra expense here or there.  In retirement, it is not as easy.

In an interview with NPR, the study’s lead author, Deborah Thorne, paints a dismal picture of retirement age bankruptcy:

“Well, they’re drowning in debt. And see; here’s something that’s really tragic, is when they strip their 401(k)s and their retirements to try to pay their bills. And they have nothing left to draw on.

And they cannot stave off the debt collectors any longer. And that’s finally what pushes them over the edge. That’s the calculation really that they make in their head. We have done everything we possibly could. We are tapped out. And they – you know, it’s like they throw up their hands and they say uncle. We can’t stand this anymore.”

No Matter Your Economic Status, 4 Things Everyone Should Consider to Strengthen Retirement Finances

Clearly, making ends meet in retirement is tougher for some.  However, we all struggle with retirement finances.

Here are 4 ways to strengthen your financial future — no matter your wealth:

1. Take Care of Your Debt: Debt is not a good idea in retirement.  Do everything you can to pay off all debts — especially credit card debt — as quickly as possible.   Here are 7 reasons to pay off debt and 3 strategies for tackling the task.

If you are really struggling, you should start by looking at debt consolidation.  Then explore negotiating with your creditors.  Creditors would much rather settle a debt than see anyone go into bankruptcy.  If you aren’t successful doing this on your own, then seek a credit counseling service.

2. Have a Plan: Not knowing or understanding your financial situation causes a lot of stress.  However, people who create and maintain a written retirement plan feel more confident about retirement.

The NewRetirement retirement planner makes it easy to get started and it helps you find ways to make retirement work for you — no matter your current circumstances.

Perhaps you will no longer want work the factory line or slave away at a desk, but there are probably things  you could do to supplement your income.  Would you consider: dog walking, campground host, coaching kids, golf course desk manager and more?

4. Lower Your Cost of Living: You’ve probably watched your spending your entire life.  However, in retirement it really becomes critically important — you have a fixed set of resources that need to last the rest of your life (no matter how long that turns out to be).

Housing is usually the biggest expense.  Can you downsize? Move somewhere with a lower cost of living?  Maybe even move abroad?

What to Do When Stocks Go Down: 10 Surprising Moves 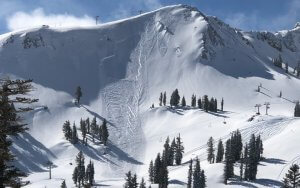 Note from the Founder: The Why Behind NewRetirement 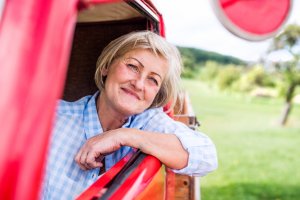 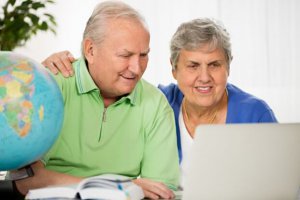 The Best Retirement Plan: Retire Like a European Socialist in the U.S.